Home » Living here » Where would you go: to Netanya or to Natanya?

Natanya (or Netanya), it’s a city in Israel. It places on the Eastern Coast of the Mediterranean Sea, and it’s really perfect place for the rest. Imagine, we have 13 km (almost 10 miles!) of excellent beaches with white sand, hot sun, and beautiful sea. Here begins Paradise.

Why we call our city Natanya and Netanya in the same time? There are two interesting stories about this. Firstly, in Hebrew the name of the city looks like that: “נתניה”. In Hebrew we have no vowels, and every word we write like thousand years ago, just with consonants. Because of that, we can read any word incorrectly. 😉 For example, how will we write “London”, – “לונדון”. In English, it will be LVNDVN (latest “N” is not like “N” in the middle of the word, because some letters have different spelling. So, ok, how we writ, that’s only one part of the problem. Now, how we read. This is absolutly perfectly, because, “LVNDVN” we can read as London (and it will be correctly), or “Lundun”, or “Londun”, or “Lundon”. That’s because of letter “ו” (vav). It can be read as sound “vi”, or “o”, or “u”. So, now you see, how hard is Hebrew? 🙂 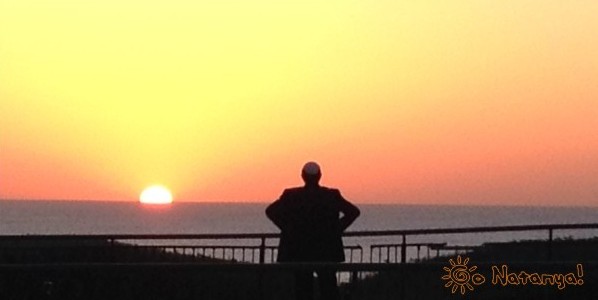 Sunset in Netanya, when the Sun goes to sleep in the sea.

So, why Natanya or Netanya? That’s because of another one exception! In Hebrew, between two consonants always can be a vowel. Or can’t be. And this vowel can sound like or “a”, or “e”! That’s why Netanya is a correct name.

And that’s why Natanya is correct too! Native people in Israel call it Natanya. Others – Netanya. And all of them are right.

The second part of the story looks like that. The city was named after of Nathan Straus, a great American man, who helped settlers at the beginning. As you can see, his name was Nathan (not Nethan), that’s why people in Israel call Netanya as Natanya.

Now, in all world maps, this city is marked as Netanya. Why? May be it’s more romantic, but the real matter is not in the name. This city is really beautiful. It’s modern, but here no factories. It’s the city for tourists, but there is no noise here. We have not great history, but all Israel’s sights are near. Welcome to Netanya, and you will see, what a fascinating place it is!